Dark Possessions
A little something extra from the mind of James Powell, in which we have a deep experience of mystery and furniture.

Note: This story is under copyright by James Powell and may not be reproduced except by permission of the author. See his website here for more information and for more writing.

Much thanks to Jesse Willis of SFFaudio for thinking of me when considering audio versions.

According to Webster
la·gniappe \ˈlan-ˌyap, lan-ˈ\
Function: noun
Etymology: American French, from American Spanish la ñapa the lagniappe, from la + ñapa, yapa, from Quechua yapa something added
Date: 1844
: a small gift given a customer by a merchant at the time of a purchase; broadly : something given or obtained gratuitously or by way of good measure
Posted by Julie D. at 9:56 AM No comments: 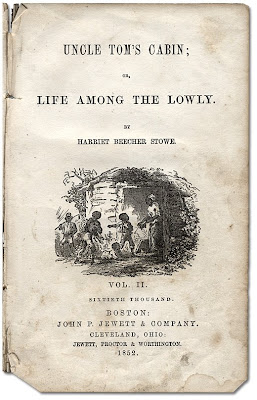 In which we experience "lawful trade" and get a glimpse of heaven.

According to Webster
la·gniappe \ˈlan-ˌyap, lan-ˈ\
Function: noun
Etymology: American French, from American Spanish la ñapa the lagniappe, from la + ñapa, yapa, from Quechua yapa something added
Date: 1844
: a small gift given a customer by a merchant at the time of a purchase; broadly : something given or obtained gratuitously or by way of good measure
Posted by Julie D. at 12:14 PM No comments:

In which we return to the plantation for Uncle Tom
and meet a mysterious stranger in a tavern.

No New Stories — But Try the Old Ones!

Please check through the library for many good stories I've enjoyed reading aloud. They are all available for download there.

The Onion's A.V. Club says:
If you’ve ever thought of listening to audiobooks but don’t want to pay for them or can’t decide what to listen to, this podcast is for you.

Having listened twice now I accordingly wanted to contact you and, firstly, say thank you for your kind words re my series. And secondly, to congratulate on both your wonderful reading voice and your particular reading of my humble tale, which, if I may say so, showed remarkable… understanding.

I’ll confess I’ve rarely revisited that particular (first in the long sequence) story, although for no clear reason, and haven’t ever thought of it as any particular favourite. However, after now hearing your version I’ll concede it might have some small merit…
========
I've Read That says:
If you didn't know better, you'd think you were listening to a professionally produced audiobook. (Actually, I prefer her reading style to that of many of the professional audiobook narrators I've come across.)

... featuring great authors and stories that should be better known. A little about the authors and their writing, with samples. Yes, forgotten classic literature in audiobook format.

What the heck is a Podcast?

What the heck is a Forgotten Classic?

1) COMPUTER: Listen to podcasts using iTunes. Go to the iTunes store. On the right side of the screen look for the word "Music." Click the link. The menu drops down and you can select Podcasts. That action will take you to iTunes Store podcast library.

2) IPHONE: You probably already have the Podcast app (installed already on newer phones or available from the App Store for free).

There's No App For That

I don't have a specific app for Forgotten Classics, but here's how to get older episodes (not showing up in iTunes) onto your iPad anyway.
To get Forgotten classic onto your smartphone, use the iTunes app. There are also a lot of other apps which you may enjoy using better. Here is a list of the top 5 apps for getting podcasts onto your iPhone.

I have a very agressive spam blocker. Be sure to put a clear identifier in the subject of any email to ensure it won't get overlooked.

Other podcasts you may enjoy.

Tell Me a Story

To Infinity and Beyond

A Sense of Place

This Podcast is Free With These Qualifications